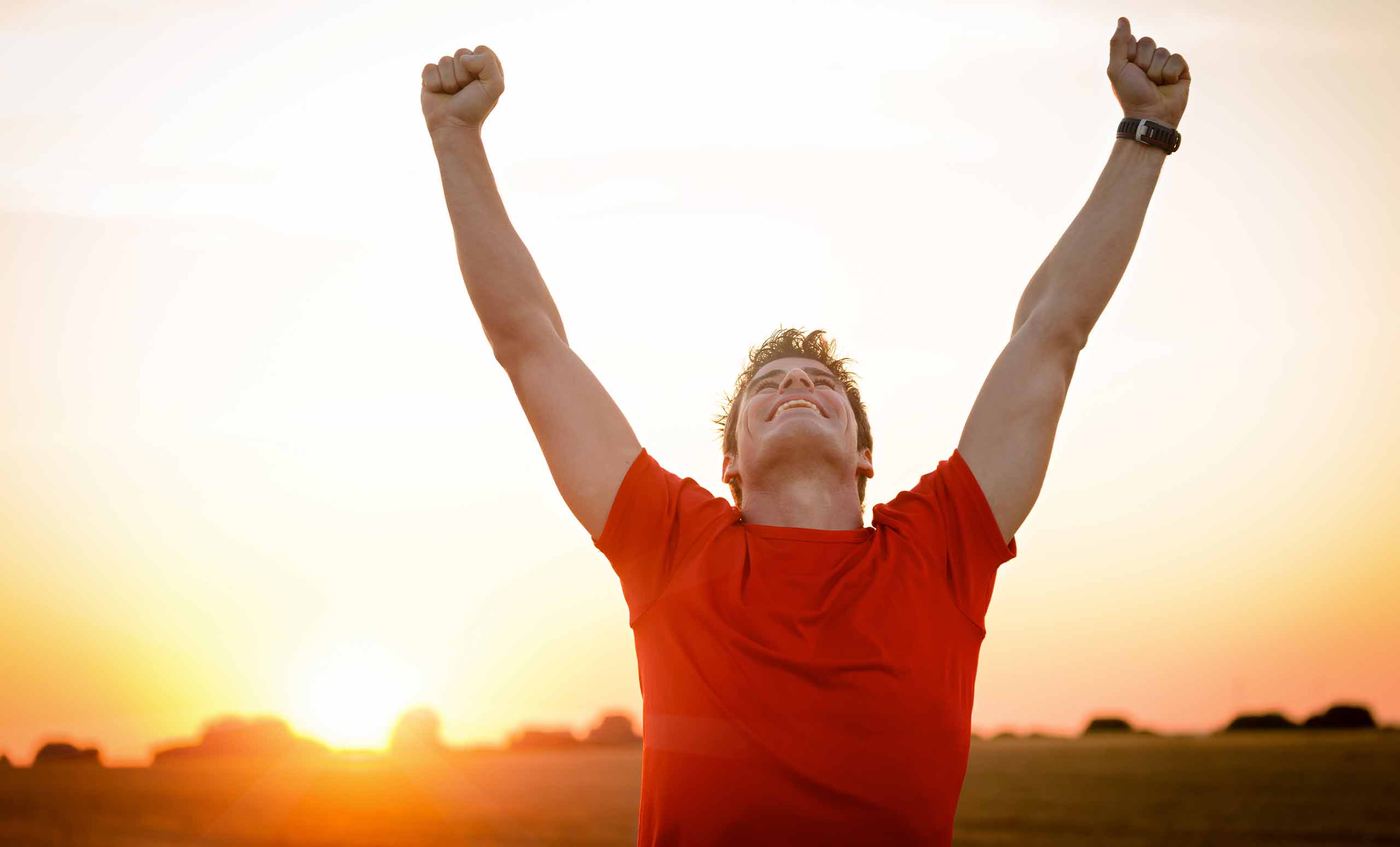 Can different levels of stress affect healing?
To answer this question first we should learn a little bit about stress systems in the body. There are four major stress systems in the human body, having the capability of producing not only immediate effects, but also potentially vast and far-reaching longer-term ones too. The main two systems that we will look at are called the neuroendocrine and the sympathetic systems. The neuroimmune and the motor systems are the third and fourth main systems involved. First, we will look at the neuroendocrine system, classically known as the HPA axis, the ‘Hypothalamic-Pituitary-Adrenal’ axis.

To get a better understanding of how stress systems work it is worth exploring evolution a little bit and why we might respond to stress the way we do. The threatening situations we face in everyday life at present is probably a lot different to what threats our ancestors faced.

As he is out walking in the woods, maybe hunting, and looking for some food, the caveman hears a rustling sound in the trees nearby. Let’s look into his central nervous system and see what is happening. The hypothalamus is one of the main areas in the brain that will be activated during a stress response. In the caveman scenario, once his ears have picked up the sound of rustling, immediately the hypothalamus is interested. This starts a reaction that eventually results in Glucocortisoids (cortisol) being released into his bloodstream. 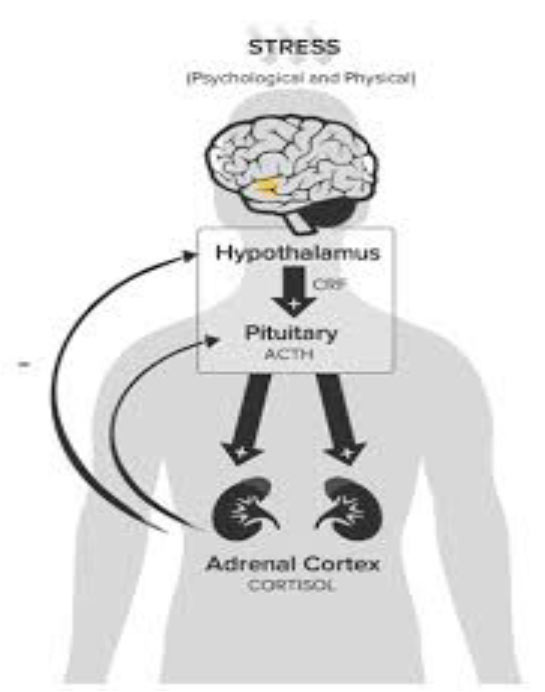 Cortisol is an immensely powerful chemical with many effects on the body. It essentially suppresses or shuts down inflammation, the immune system, reproduction, and digestion. At the same time, it mobilises stores of glucose and stimulates the body to produce more glucose. Why do we need cortisol? The answer is simply because it is useful for survival!

For the caveman and his emergency, he needed vast amounts of energy hence mobilisation and production of glucose – energy – and he did not want any of that energy wasted. So, we have evolved a means of conserving energy in a stressful situation by…..

Cortisol and other stress-released hormones working together with the sympathetic system’s effects are all involved. In an emergency this may be a particularly good and appropriate response by the body, but what effect would ongoing or long-term stress have on the body? Think about how important the healing and repair process is? And what about the immune system? We will get back to that but let’s move onto the Sympathetic system for a bit before trying to tie it all together.

You may have heard indirectly about the Sympathetic Nervous System – it is essentially our fight or flight response to an emergency. We could update this fight or flight to the 5 F’s – fight, flight, freeze, faint or befriend (basically submit and hope for compassion).

Let’s go back to our caveman again. He hears the rustling in the trees nearby, he suddenly stops and looks around trying to see what it might be. His heart rate is up, pounding away, and his pupils are dilated, trying to take in every little bit of light that is available to him in the woods. Let’s go into his brain and see what is happening.

Well his threat/fear centres have processed the situation and made him feel very uneasy, his thalamus and amygdala (major threat processing centres deep in the forebrain) are going crazy. The eventual outcome of this is the release of adrenaline and noradrenaline from the adrenal medulla with its associated commands to the body: 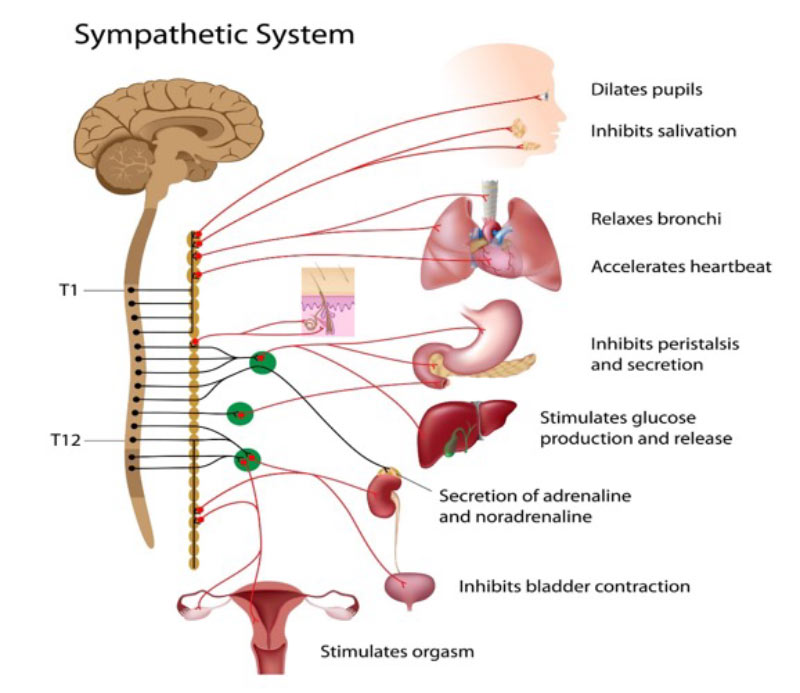 The sympathetic system, in contrast to the HPA system, is far faster because it is mostly impulse driven right to its targets. There is a direct sympathetic nerve supply to the lungs, the heart and all the blood vessels with the result that blood , plus oxygen, plus nutrients get quickly shifted to where they’re needed most and shifted from where they are needed least.

What does all this mean? Well for our caveman, the activation of the threat centres in his brain and the eventual release of those powerful chemicals (cortisol, adrenaline, and noradrenaline amongst others), gave him a much better chance of survival. Who knows if he did outrun the sabretooth cat?

Now stress and ‘threats’ come in many guises. A caveman may well be astonished at common modern stresses or threats but there is no doubt that modern human brains seem particularly good at coming up with different stressors. As a result of our wonderful stress systems (and they are wonderful because we may not be here at all if our ancestors did not have these systems), ongoing stress can affect healing. It could potentially shutdown, or at the very least slow down our healing response to structures that require healing. As we have seen, it does a similar job on our immune system. Have you ever noticed that you are more likely to feel run down or get sick when you stressed? Think a similar job on our reproductive systems and could this potentially be one of the reasons for fertility problems?

Another reason why I feel it is so important to understand the stress systems in the body is that many people suffering with long term persistent pain, will understandably view their ongoing pain as a threat. However, this could result in potential activation of our stress systems (threat centres in the brain) with the outcome being slower healing and potentially more worry and anxiety, and again increased threat.

So, what can you do? Easy – reduce your stress levels. If only it was easy. But there are some tips and advice that might make it a bit easier and encourage appropriate healing in the body. I will discuss outline these in ‘How can we encourage healing?’